Crossing the Bridge of Failure

One of our first modules this year was to design a bridge out of toothpicks, string, and glue. We decided that we wanted a simple design, so we decided to create a truss bridge, which we learned how to make in 6th grade. We first created the basic design, which was two trapezoids, and made beams that attached each vertex to create a bridge. Then we used toothpicks wrapped in string to create the trusses. Somehow, when we were trying to reinforce our design, our trapezoids became warped, and our final bridge was too tall, and not long enough, and we had used nearly all of the string. When we were testing how much weight it could hold, it was so unstable that it kept bending over when we put more weight on it. For some reason, it didn’t “break” because of all of the string we had used, but when it bent, it became very unstable, making the weights fall off. We decided that 54 grams was enough weight for us, and we were finished.

After we had finished our bridge and we were marveling at how awful our bridge was, we lost confidence, and we gave up on our design. We were disappointed in ourselves, and our bridge didn’t reach requirements. We had worked so hard on something that had failed, and failure didn’t feel great. But I realize afterwards that failure doesn’t necessarily mean that you have failed on your own terms. You can still work hard and fail, but be proud of yourself because you’ve accomplished something. I realized that creating a bridge that holds weight out of toothpicks, string, and glue is not an easy task, and now that I look at our bridge again, I don’t see failure, I see something that could be improved, I see the next step in an engineering career, and I see our hard work.

This year has made me learn so much- not just about our three pathways, but also working with others, how to succeed by taking risks, and most of all, failure isn’t bad, it’s how you reach your goals. 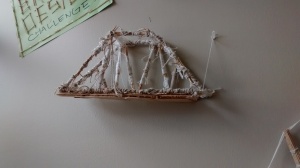 Here’s our bridge that we have made. It’s even hanging on a wall!