The start of the skateboard project. The new project is making a skateboard. The whole idea is that there aren’t many women skateboarders, and that skateboarders fail a lot, but keep getting back up. Women are great at that! We are resilient, especially at this school. We build houses and benches and all of these other things, and when one thing fails, we fix it and keep going.

I am really excited about the designing portion of the project. My brother used to skateboard constantly, and I noticed that when he went to the skate park there weren’t many girls riding skateboards around. I also noticed that in the skateboard shop there was a street deck that had the sign of a woman (like the kind you find on the girls restroom sign) on the bottom of the board. I found that really strange. Why did they have a woman on the board? What was the point of that? When I looked it up, some say that it was because someone had once joked that “they skate like a girl”. I found that really offensive, even though it is a common saying.

After I found out why the group decided that would be the name of their brand, I was thinking it would be funny to make our design called “boy”. You skate like a boy. Like any normal person would, it doesn’t matter what gender. You skate well, thats it. I really like this idea, but I’m not sure if we will do it. It would be fun to see how it would come out. I’m excited to start this project! 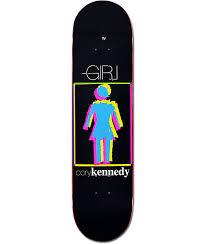