There was an error retrieving images from Instagram. An attempt will be remade in a few minutes.

There have been a lot of times in my life where I was having difficulties with whatever I was doing. One of those times was when I was working on a module. For this module we had to create three robots, and program them. I had previously been in robotics the last year, so I knew what I was doing most of the time. My group and I had almost no trouble when we were building the actual structure of the robot. That was the easy part, and we breezed though it. But when it came time to program the robot, I was a little over confident. During the whole project I thought that I knew what I was going to do for the programming. I had been the programmer after all in robotics. The thing was I had had guidance the whole time.

I honestly hadn’t picked up as much as I had wanted. Finally the moment had come, and I sat in front of the keyboard. I had pumped myself up for this moment, and now my mind had gone blank. I didn’t even know where to start. It seemed forever that I stared at the letters in front of me. Finally when I thought I had something, I typed it quickly into the computer. Hoping I had had a breakthrough I downloaded it to the motors. Giddy with excitement I pressed go. But nothing. The robot sat there not moving, and I lost hope once again. Racking my brain for any one shred of memory I tried again. With less enthusiasm this time I put what I thought would fix it into the computer, and pressed go. Again nothing. Time was starting to run out, and I was ready to accept defeat. Knowing I wouldn’t be able to figure this out myself, I consulted my trusty friend, Google. About an hour later, and much more frustration, it worked. I pressed go and to my amazement it went. I don’t know why it went, maybe it was my perserverance, or just Google, but it went. Still it didn’t work perfectly, but with time and effort, it went.

This experience really taught me thatI shouldn’t give up. With every problem there is a solution, it just may take longer than planned to find it. That doesn’t mean you should give up though. I didn’t give up, and the robot eventually went. 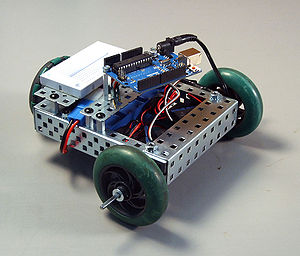