For this module, we had to build a sign out of recycled letters. We decided to build the letters for integrity. It wasn’t really hard to find items since there was a recycle box. But, building the letters were a bit harder. This module was fun even though it took us a while to finish it.

For the letter I, we decided to use a plastic stick we found and a plastic circle. I painted the stick blue and it was kind of hard since it was plastic and the paint was watery, so it needed like 3 coats for it to show. My partner painted the circle of the I, and she didn’t really struggle with hers since her paint wasn’t really watery. The ending product was ok, I probably should’ve added more coats but it’s ok. The next letter was the N. I decided to make it out of a cereal box and also make it 3D. It wasn’t really hard to make but it was kind of hard to make it even. There were a lot of lines from where I was drawing the N so my partner painted it and it turned out good. We made the T by cutting a T-shape out of a piece of Styrofoam. Then we colored it orange. After that, we made the E. We got a little pole we found and some paint palettes. Then we hot glued them onto the pole and made the E.

Next, we made the G. I decided to do the G the same way I did the N. I cut it out of a cereal box and made it 3D. Then I painted it green to hide the lines where I was drawing the G. For the R, my partner cut it out from a material that was like cardboard. Then I painted blue with some black designs. My partner found some more Styrofoam and a metal circle, so she decided to hot glue them together. For the next T, we found a piece from a pool noodle and we rolled up some paper for the top part and hot glued them together. The Y was my favorite because we found a piece of wood for the bottom part and then we found another piece of wood shaped like a V, so we decided to hot glue them together.

At the end, we decided to glue all of them together so that the letters won’t get lost. I liked how our word turned out. I learned how to reuse items and make them into new things. I liked this module and it would be fun to do this again some time. 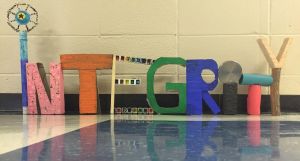 Here is our word.