The intro to photography module was very interesting for me, and very fun. For the first part of the module I chose a significant picture and wrote about what it meant to me. I chose a picture I took of the city of Los Angeles, this city is so important to me because living in a city like that is my goal. That city makes me so content and I thought it was a beautiful picture I took from my airplane. The interesting thing about photography is that not everyone has to understand what the picture depicted to you when you took it. Photography can depict different things to different people, everyone has a different perspective, and that’s the cool thing about it. 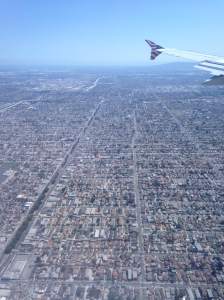 econd part of the module was to build our own camera. I thought this would be difficult, but it wasn’t, it was very unique. We had to build a cardboard box for the body of our camera. We cut a square through the front of our camera and put foil over it. We then poked a hole through the foil, which needed to be very small for the camera hole.

After building the camera we had to go in the dark room and put camera film in the camera. We then went outside and took a picture of a plant. We had to leave the camera hole open for two minutes, for the picture to be shot correctly. Last, we went into the dark room and developed the picture, which wasn’t bad for it being our first picture. This module was super fun and I encourage everyone to try it!