Hey y’all I’m Prisila. I’m a current 8th grader at the Ann Richards School For Young Women Leaders. I take a class called PLTW or Project Lead The Way. For the class, we had to do a project called “the maker project.” For this project, my group and I decided to build a playhouse. We had measurements, an online model, and a prototype. We then started building our house.

During the process of building our house, we went through a lot of failure. Sometimes our measurements were off, or we didn’t have enough material. When we had to build the roof, we had no idea how to do it. We got an idea and tried to do it but it was too hard. When we found an alternative, it didn’t quite work out. We had to make weird cuts that were hard to make on the wood to make it work, but we finally did it. Another time, we had to cut out a wall, but something went wrong. The saw decided to take it’s own turn and we made a wrong cut. We thought that we had lost the wood and wouldn’t have enough to finish the house. We started freaking out, but then we realized it was still useful for a smaller wall.

Failure was a big part of our project. I always got really frustrated when things didn’t work out. This project made me really stressed when we encountered failure because i thought we didn’t have time to fix our mistakes. I always thought that we only had a little bit of time, so it always stressed me out. Although I was stressed and frustrated, we managed to fix our mistakes and finish our house.I was really proud of all the work that we got done.

Failure doesn’t define anyone or anything. We all make mistakes and we can all go back and fix them. Failure is a part of life and we all have to live with it. 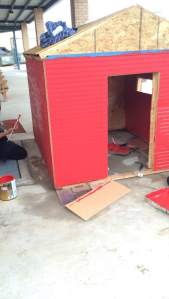