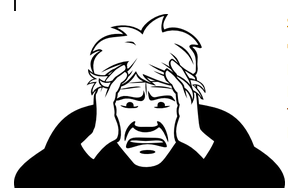 So here we go again. It was a real struggle to be an eighth grader this year. I just finished my maker project; The Maglev Train Model. Like always, I had a problem. That I wanted to rip out my hair. I wanted to cry so bad, but I didn’t. Instead, I took a deep breath and said, “Again.”

I had no idea how the maker project was going to turn out, but I knew that something was going to float. I started with designing the train, but that turned out to be an epic fail. Of course that wasn’t when I felt like giving up. I failed, but it wasn’t a big deal. I started designing the train again, but this time I made it a little simpler. Instead of making a “train”, I just made a box instead. I kind of changed the project a little, because the most important part about this maker project is to make something levitate.

My purpose was to show the basics of how Maglev Trains work. This Maglev Train model was supposed to show people how much faster something can travel without friction. Even just 1mm of levitation is enough to travel at lightning speed. Imagine a world where we can just travel from city to city in a matter of minutes, later seconds. Imagine how much time  we can save traveling. Imagine how much money that we can make from convenient and fast travel. Time is money.

After we successfully built some boxes, we started making the track. The process of building doesn’t take that long, but the process of assembling does.

This is the first layout of our train track and the train. The type of magnet that we used for this project played the main role. The way that the magnets are laid out is really important. The first time I tried to make it simple. The tiny box levitated at the edge of the track, but when putting it in the middle, it stopped. The first plan didn’t work, so we completely took out all the magnets and started over. We had to take the glue out. At first we used tape, and it turn out a failure as well. Using tape decreased the magnetic forces from the magnets, so we decide to use hot glue instead.  Working with magnets was so hard, it was even harder than working with a little kid. The magnets would stick to random places, and kept moving around. They wouldn’t stay still.

After the first fail, I thought of another idea, and it didn’t work either. This time, I separated the magnets.

This gave each pole an equal amount of force throughout the train track. The only problem then was that the box just levitate and was pulled track. This plan didn’t work either, so we took everything apart and tried again. This time I arranged that magnets differently, again it didn’t work. I had to take everything apart again. This project was mostly about trial and error. I didn’t really have a set plan in mind, everything that I tried and everything I could think of didn’t work. In my mind, I was constantly thinking about a solution for this problem. Like, why did the train keep attracting to the track? When I walked to class, I thought of a solution to that problem. I tried to work it out, and when it didn’t work, I had to start over again. The whole time in this maker project, I was constantly failing. It just didn’t want to work. I failed so much to the point where my teammate thought about quitting the project, and trying something else. My teammate tried using copper wire and the battery, but it didn’t work. The process of assembling, gluing the magnets onto the woods, and taking it off again and again, was a pain the butt. I want to cry really bad, but I didn’t. I kept on saying, “Again.” and, “again.” I failed, but I tried again. I’m constantly trying to find a solution, because everything can be possible if you at least try. I also believe that if I do or try to make anything, I’ll complete it. I get really upset if I can’t accomplish my task. The thought of giving up really frightens me. 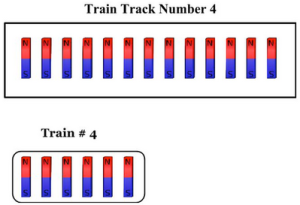 The day before, the project was due. I tried a totally different plan, and surprisingly, it worked!! I realized that the train wouldn’t stay still, so I also had two bolder lines with magnets running through them.

This way, it kept the train from flying off the track.

This is the final layout of the train track with magnets. I think that this project is a test for me to see if I can be creative and do something without the teacher’s help. In the end, this project was my endurance test, to see when I decided to give up. But I won,, because I didn’t throw this project in the trash, instead I worked on it until it was completed.. And we finished. 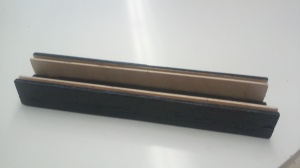