In 7th grade PLTW, you learn quickly that Inventor is not at all your friend. It’s an awfully obnoxious application in which you can create 3-D shapes of your own devising. First, you make a sketch of what you want to make. You then extrude it (or make it longer, or give it its third dimension), and you have your first shape. This isn’t always so easy. Sometimes, if you’re making a more complicated shape, not all of the lines you made meet up, so you have to go through and make them meet up. Then, it’s possible that you’ve extruded it in the wrong direction, or too far, or too little. If you’ve made it that far, then assembling it is even worse. You have to give the computer specific instructions for how to assemble it, using vocabulary that I don’t really understand (this is also called constraining.) There are several different constraints for all different purposes, and even now, I couldn’t explain them to you.

Now in 8th grade, for the most recent project, we had to use Inventor to create a simple object that we had on hand. My two other group members both used their iPhone 5 and iPhone 6, but I have an android phone, which is very curved, and curves are pretty difficult to do on Inventor, so I decided to use my Chapstick container for this project, (or Module, as we refer to in class.) I thought, ‘well, it’s just a cylinder with a lid right?’ so, I opened up Inventor on my computer, and tried to figure out how put a grid on Inventor. I remembered from 7th grade that we had to have a grid, and that it would be super difficult to sketch without a grid. It took me about half an hour to finally realize that it was almost the end of class, and I had accomplished nothing, so I ended up just stopping, and deciding to sketch without a grid.

After that, things got a lot easier. My group had gotten a head-start on their projects, so they helped me along the way. There were a lot of things that we didn’t remember, so we did a lot of trying things out, then pressing Ctrl+Z  (for all the non-nerds out there, Ctrl+Z means undo) a bunch of times before we got to what we needed. I think that using Inventor for a second time has made me appreciate it more. I took a computer programming class over the summer, and I’m amazed at complicated Inventor is. Everything that you make looks nearly real, and the application really is smart. I wasn’t able to see what a great idea inventor is, because I was really annoyed at it. I guess knowing what you’re doing really pays off.

After just one-ish class periods (about an hour and a half), I had finished my Chapstick container. It didn’t take as long as I thought it would, and I think it turned out pretty good. I had two pieces, the cap and the actual Chapstick “Base” where the Chapstick-y stuff goes into. I really hated this next step of Inventor, because my group members hadn’t worked with it yet, and I had an awful experience with it last year. I had to assemble the pieces, so that the cap could go onto the Chapstick base. After trying some random things, and pressing a few buttons here and there, I had managed to make the cap go up and down above the base, but the cap would go past the base, and it wouldn’t work. I asked Ms. Sauter  about it, and she said she wasn’t sure, and told me to look it up, because after all, Google is another smart invention that I should make use of. I knew it was smart to utilize the internet, but I didn’t know what to look up. “How to constrain a cap on Inventor?” “How to constrain a Chapstick container on Inventor?” I really didn’t know what to look up, because all situations on Inventor are completely different. I ended up leaving the cap as it was, because, after trying everything, there was nothing that I could do about it.

My group members were having completely different issues. They both used their iPhones as models, and one of them had an iPhone 6, which has curved edges, making it extremely difficult to create. She was able to create the shape, but she wanted to put pictures of her phone onto it to make it look like a real iPhone. The only problem was that she couldn’t put the picture on the round edges. She was working on doing this the entire class, and she realized that it was impossible to put pictures on the curved edges, so she ended up coloring the edges with a silvery aluminum texture, and finished her project, which ended up looking amazing in the end.

From this module, I learned that it’s okay to compromise, because sometimes, technology doesn’t always have the same ideas you do, so you have to be flexible to be able to finish. If you don’t, you’ll keep trying again and again to get it exactly as you want it, and you may not finish in time. It also applies to life—if you’re working in a group, and you have opposing ideas, you have to compromise instead of arguing the entire time, and never finishing. I also realized that you should always give it a second chance, even if Inventor is finicky, and annoying, you might find yourself appreciating it more in the end. 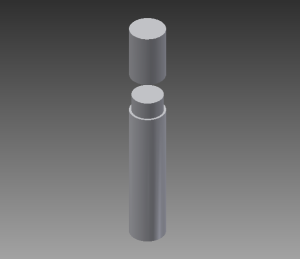